20,000 hours without lamp replacement
with an LED projector

LED projectors have been around for some time in meeting rooms, offices and classrooms. Finally, they have also found a home in living rooms and home cinemas. The obvious advantages of LED technology are also appealing for demanding home cinema enthusiasts.

The idea of ​​using LEDs as a light-generating unit in a projector is not new. In the early days however, this technique lacked the sufficient brightness for good projection. Over the years the LED technology has been greatly developed: The light intensity increased and the image quality improved accordingly. The era of LED projectors has begun.


Considering the long life of LEDs, it quickly becomes clear that LED projectors are far superior to lamp projectors in terms of energy efficiency. Where the lamp of a home cinema projector goes out after 3,000 - 4,000 operating hours, the LEDs of an LED projector continue to supply the device with light. This feature makes them more and more interesting for use in home cinema, as they can keep up with the life of a TV set. 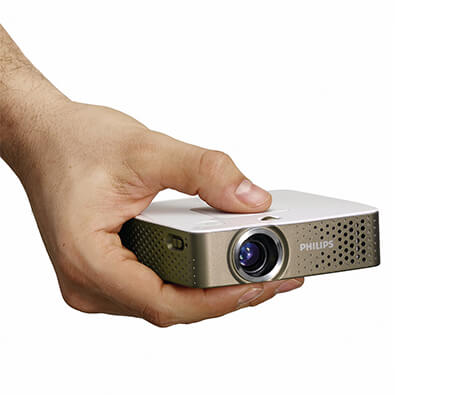 Benefits at a glance 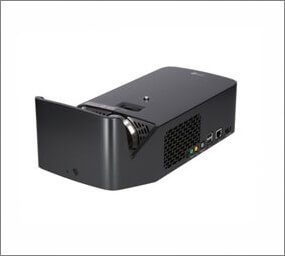 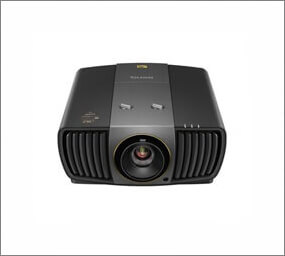 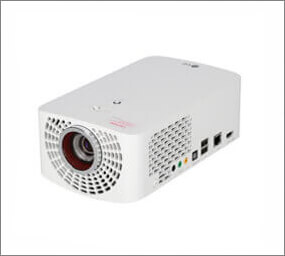 A LED projector works in principle like a lamp projector with a DLP, LCD or SXRD chip. Only three LEDs in primary colours red, green and blue are used here instead of a projector lamp. In laser LED hybrid projectors, a blue laser produces the colour blue and in conjunction with a phosphor wheel, the colour green.

LED is not an imaging technology such as LCD, 3LCD, DLP, LCoS or SXRD. The LED units used replace only the projector lamp and this can have many advantages. 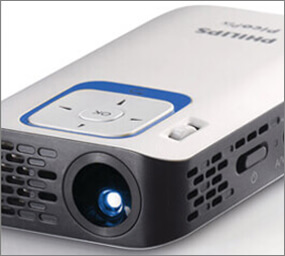 Mini LED projectors are compact devices for mobile use. Some Mini projector models are even so small that they fit easily into a coat pocket. Although they are far from the light intensity of larger models, they far surpass them in mobility. Are you traveling a lot with smaller presentations and lectures? Then buy yourself a mini LED projector - a reliable companion. 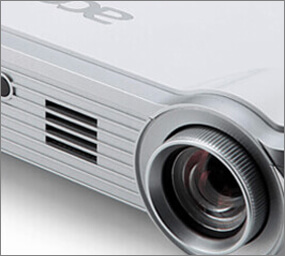 LED projectors have a very long life. This means hardly any maintenance and no additional costs for the purchase of new projector lamps. This saves a lot of time and money, especially in the business area. Office LED projectors are not just for those on the move, meeting rooms and conference rooms can also benefit from a LED projector. However, we recommend LED Laser Hybrid projectors for use in larger, lighter rooms thanks to their better light output. 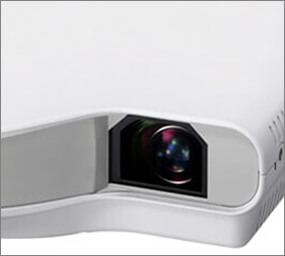 LED projectors come with numerous features. We’ll take a look at the most popular features here.

The compact design of many LED projectors makes them very inviting for mobile usage. You could take it over to friends for a movie night or on a business trip with presentations and lectures. To add to the convenience, projectors will often have some speakers built in, offering an all in one solution. Be wary here though, as some offer far better audio quality than others.

Good things take time - but that does not apply to LED projectors with the quick start function! Usually the projector is ready for use within 10 seconds. Especially in presentations, lectures and meetings, it saves a lot of time.

Wireless freedom can also be found in some LED projectors. WLAN-compatible LED projectors do not need a connection cable to the player. Audio and video are simply transmitted via the established WLAN connection.

Tip: On our WLAN projector page you will learn everything about wireless projectors.

Casio LED projector for the school

Casio is known for its high quality education projectors. The projectors meet all the requirements of a first-class education unit: they are energy-efficient, powerful and easy to operate. Long lifetime of the light source makes it a worthwhile investment. 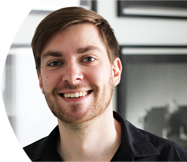 Do you still have questions about the selection of your display? We also advise you personally - we look forward to your call or e-mail! If you prefer to be called back by us for free, just leave us your contact details.
Contact form Contact person