The minimum and maximum distance between the projector and the screen is calculated automatically.

The minimum and maximum image size is calculated automatically.

What does the projection distance mean?

What does image size mean?

When installing a projector, various things must be taken into account. One of them is the distance between the projector and the screen. This has a fundamental influence on the image size, which also affects the choice of screen size. Of course, you should first consider the space available for the image size.

One point you should also consider is that the projector distance is not always the same as the seat distance. Often you have obstacles in the way, such as a ceiling lamp, that do not allow mounting at a normal distance. In this case, you need either a projector equipped with powerful telezoom optics to be placed behind the audience or the obstacle on the ceiling. The same applies to the shorter projection distance, for example, if you need to place it in front of an obstacle on the ceiling. In this case, a short-throw projector is a good choice, as it can achieve a normal image size at half the usual distance. With a projector without special optics, however, you have to come back to the optimal position.

If you own a high-quality home cinema projector, you will usually have no problems with the projector distance, as the lenses are usually very flexible. The zoom lenses used here are often equipped with a 1.8x to 2.1x zoom. This gives you the option of varying the picture size at a fixed distance or varying the distance itself. Especially for larger living rooms, this gives you the possibility to adjust the point of placement very well to the spatial conditions. In addition to the good zoom lens that home cinema projectors often have, they also frequently have a lens shift function. This allows the image to be shifted vertically and sometimes horizontally as well. This contributes to a much easier adjustment of the image. This means that more possibilities open up than is often the case with non-home cinema projectors.

Another point where the distance of the projector to the screen plays a decisive role is the use of a projector for motion games with game consoles. Often this is not much fun on a TV set because the size is simply not sufficient. The image of a projector is much more immersive as you practically feel like you are inside the game. Since you have to move in front of the screen for these games, a normal projector doesn't really stand a chance here, since the distance between the projector and the screen has to be extremely small so that you don't stand in the cone of light. This is why devices with short-throw or ultra-short-throw optics are particularly suitable for these applications. Here, the distance between the projector and the screen is so short that it is still possible to move around behind the projector. This way, you do not cast a shadow on the image and you do not accidentally look into the light of the projector.

If a projector is used in a larger hall, room or even in an event hall, the projection distance is often fixed due to the ceiling constructions there. This means that a projector with interchangeable optics must be used. Depending on the distance, you can use a tele zoom lens or a wide angle lens. This makes it much easier to fix the position of the projector at a fixed point than if you have to resort to conversions or other substructures for a suitable projection distance.

If you have already decided on a projector or want to compare a few devices, you can also use our projection surface calculator to determine the distance or image size. 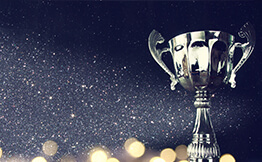 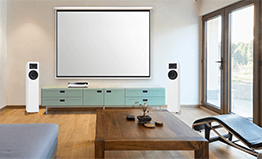 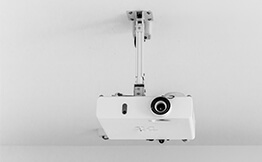